During lockdown in 2021 I found a notebook of handwritten stories of our trip to Manchester. 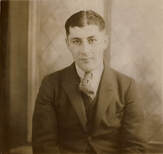 Uncle Morris
Sandra and I drove up to Manchester in 1992 and stayed in a B&B in Wilbraham Road. It was twenty years ago since we were last in our hometown, together. At that time we had come to visit our Uncle Morris about the death of his sister Rosie, our Aunty. The car a Suzuki Swift kept on breaking down and we called the AA out several times. We managed to get the car working again after paying for some repairs.
On this trip we planned to see Uncle Morris again and take a look at the house we had grown up in. As the car was too unreliable we left it at the B&B and ordered a taxi to drive us to Crumpsall. By chance the taxi driver was Jewish and he was happy to fill us in about the area. He told us how Jewish life had changed. 'The smart areas, Prestwich, Whitefield, Ringley Road, Scholes Road were all expensive areas now,” he said.  In 1961, after our Dad had died our mother sold Stanley Road where we had grown up for £5000 to £6000. Now in 1992 it would sell for £150,000. “The area Stanley Road, the orthodox Jewish area has become more frum now. In a way the area has become like a shtetl, ghetto. That is why the area has gone down. In the Broughton Park area there are no Jewish clubs left. There is too much competition in Manchester for nightlife,” said the taxi driver. He gave us his card so we could call him again on this trip.
(Frum – extreme observance, beyond requirements of Jewish religious law)
​

We arrived at Carmel Court where we knew that Uncle Morris had been living. It was a Jewish old peoples home and smelled of age. Carmel Court was older shabbier than we remembered it. (It was built in 1963 with a block of 65 bedsits. It was sold in 2011)   After our last visit 20 years ago he had not kept in touch with us, which was strange as he had been fond of us girls. However, we hadn’t kept in touch much with him either.  We recalled as we entered the building how much he had hated our mum.
​
HERE IS ONE POSSIBLE REASON WHY HE HATED OUR MOTHER. When we were about 22 years old and living in London  Uncle Morris had given our mother money for Sandra and I to help us out. She came up from Manchester and met us in a hotel for tea. With a flourish she plunged her hand into her handbag and pulled out £2000 pounds in cash for each of us. She boasted that she had given it as a demonstration of her generosity. Our mother never ever told us that the money was not from her but from Uncle Morris. Uncle Morris had been upset that we hadn’t bothered to thank him! He realised later on that we had no idea at the time that the money was from him and not our mother. We were touched and thanked him for his generous gift.
There was a list of residents. Uncle Morris’s name wasn’t there. A man in his 40s in white shirt black trousers came towards us through swing doors. He was the manager. We asked about Morris Horowitch. “He’s dead”, the man said. “He died a few months ago February maybe over a year ago. He died in 1990”.  He was 88-years-old. (He was born in 1902.  The only thing he kept of Morris’ was a leather embossed Haggadah a Jewish book for Chanukah.  He offered it to us. “I’m sorry to give you bad news he said. “He left his money for some animal charity in Israel. I went to Blakely cemetery where printed in the record book were Morris's only next of kin listed, Joseph (our father) brother and Rosie sister. As far as we knew," the manager said,  "he had no next of kin.
​
He was a recluse and he would give me tips about shares. Morris used to go around rubbish bins collecting newspapers. He was a character and he had left no record of any next of kin. He was an odd man. Everyone considered that he wasn’t short of a bob or two. He never painted his place. It was filthy. He hadn’t been ill and one day he collapsed in the lift and was taken to hospital by ambulance. He died shortly afterwards. Everything he had was put in a dustbin. Too many old people die with no relatives, no history. Everything is thrown out to rubbish collections”.

Sandra felt moody and I was slightly surprised but not overwhelmed that we weren’t contacted.  A reminder, that there are no guarantees in life. As children we went every week to visit Uncle Morris and Aunty Rosie. That Uncle Morris didn’t want to acknowledge us as next of kin was a final reminder that we weren’t intended to have any of the Horowitch money. Our mother in her Will left her money for the grandchildren to inherit when they reached 25 years of age. When, she died our children were only a few years so old. Our mother bypassed Sandra and me. Our Dad had left all his money to our mother.   We didn’t go there with mercenary intentions, definitely not.   We both were surprised he had made a Will.
​
After Carmel Court Sandra and I wanted to take a look at the house where we grew up. We got a taxi again to the Broughton Park area. Everyone was Jewish around there. In the 1950s some people we met at that time  had been in concentration camps during the Holocaust. They had tattoos on their arms of their camp numbers.
​
We walked to our old house at Stanley Road and knocked on the door. The last time we had been in our house was 1961, the year our father died. The lady who owned it now, remembered our name. She was a short blonde stocky woman with a baggy jumper and wore a neck brace. She was from Liverpool, a market, Jewish trader selling Marks and Spencers' seconds. She had bought the house 16 years ago from the Herwells who 14 years earlier had bought it from the Horowitchs, our mum  She invited us in and amazingly she knew stories about the former owners us, the Horowitchs. She had friends who used to play with us in our playroom Rita Radivan nee Rita Pollock.

Amazingly, she knew names of people we had played with as children, Irene Freedman, Mark Ziegler, Philip Aronson from Marston Road, Susan Landsman, Susan Mendelssohn, the Gibbs the market family and Morris Radovan.  Rita Pollock had told Greta Sneider that she used to play in the top room with the Horowitch girls. They were all her friends.

The Feinegold's an extremely orthodox Jewish family still lived in the large house next door: the Lawson’s were living on the other side. We had gone to a girl's grammar school, Broughton High with Gita Feinegold. We never mixed outside school. One day we offered Gita some chocolate. She dropped it deliberately on the ground so it would be too dirty to eat. It wasn’t kosher enough for her to touch.

​The market lady told us the following stories. "Gita was already a grandmother. One of Gita's daughters married in 1991 and bought a house across the road from her mother. The Feinegolds' children loved watching Greta Sneider’s TV as they never had one in the own house. Gita didn’t want traffic to come through the area wanting only prams. The council wouldn’t agree to that." 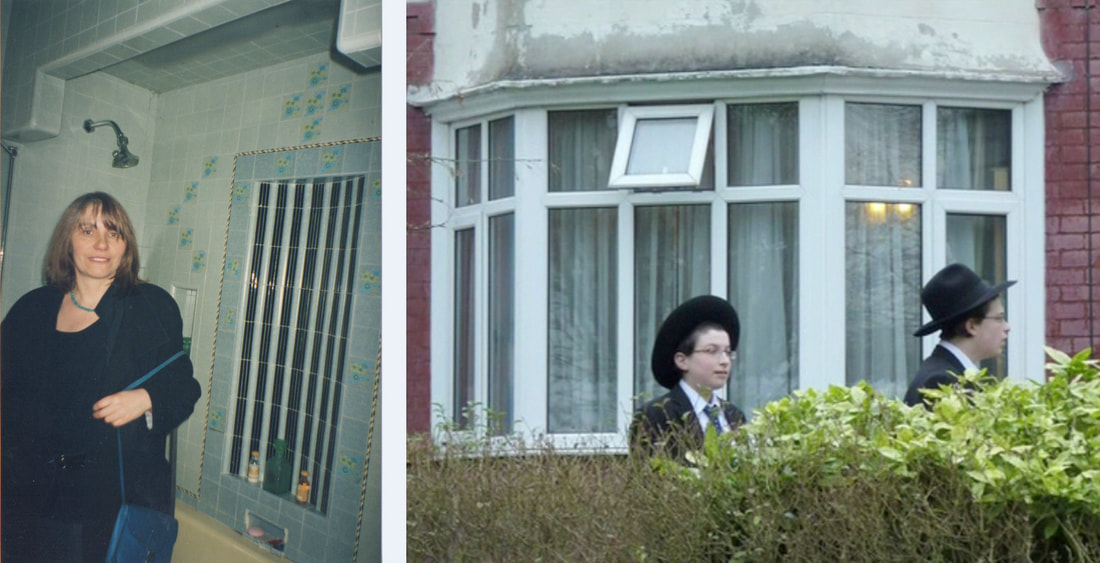 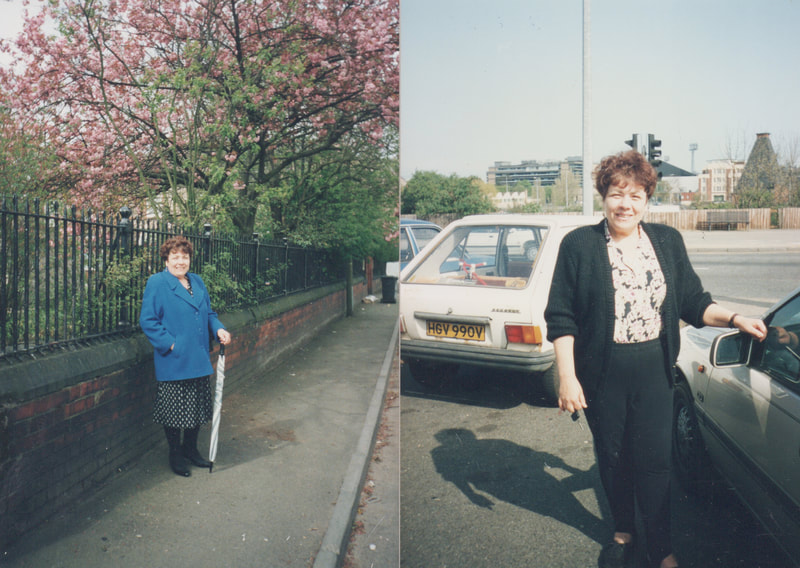 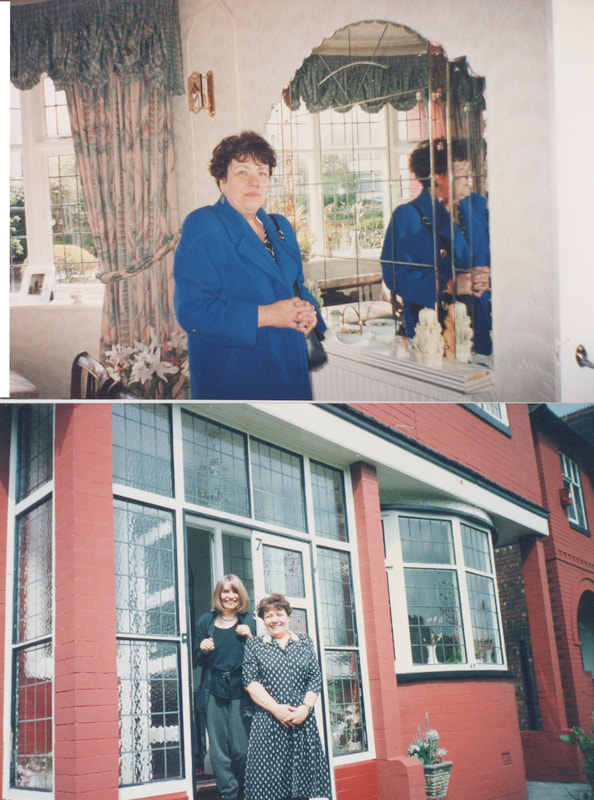 the mirror from the 1950s
THE HOUSE
Seeing Our House Again
The garden seemed much smaller. The ground floor rooms had been knocked into one with no door in the hallway. In the lounge the fireplace had gone but one of the original mirrors was still there looking very 1930s but was a 1950s period piece. ​ 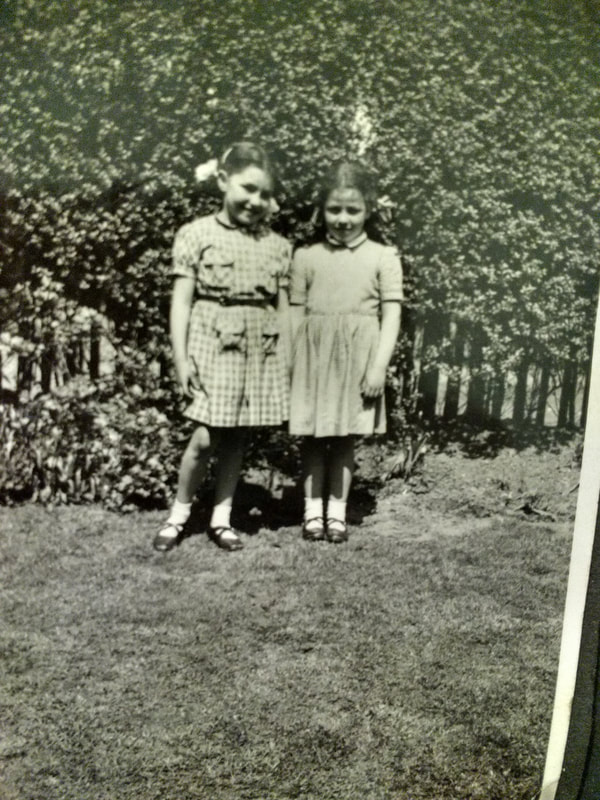 Myrna & Sandra in their garden 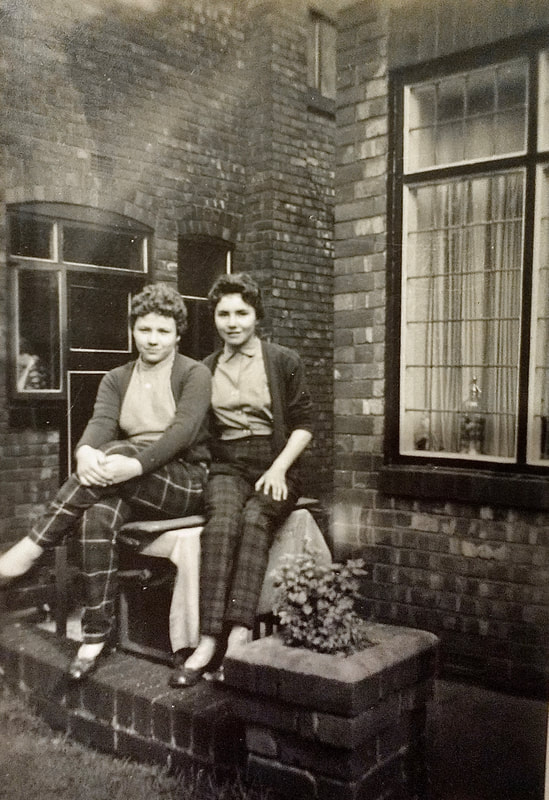 Sandra and Myrna at the back of their house
The wonderful parquet floor was now covered in purple carpet. The kitchen felt small refitted but when she had bought the house 16 years ago our original kitchen, modern for its time was still there.  The house she said was in terrible condition when she bought it from the Hurwells.

Then she told us about some of the people we had been at school with: everyone seemed to have stayed very involved with the local Jewish community, some marrying Rabbis and others going to live in Israel.  Sandra's and my life since leaving Manchester moved around a range of other communities.

Everything in our old house was now expensive looking tat but when we went up to the playroom which was now their stockroom as they couldn’t use it for business reasons there on the walls were the original prints of pre-war Zoo pictures which were from our childhood in the 1950s.  Sandra and I remembered them as always being there. It gave us a jolt to see them again 30 years later.

The heavy curtains were still there now covering stock. They had been part of a theatre our mother had created for us to put on plays. Our mother had wanted to be an actress herself.

1950s and 1992 the same posters on the walls
The bathroom was still unchanged from 1961, Art Deco looking and charming.  Next to the front door our mother used to have her collections of brass gongs, bells and silver candlesticks, dishes and things which we had to polish every week.  The original Art Deco mirror was still there.
​
The market lady then made a statement that rendered us speechless. “This has always been a happy house a Mazaltov house,” she said.  Sandra and I when we left couldn’t stop laughing.
The house for us had darker memories. Our mother's many attempted suicides, her alcoholism, and her hysteria. Memories of Myrna’s fear of the dark plus endless imaginative games which Sandra and I shared to ward off fear - of having to walk on straight lines or the bogeyman would get you.
We walked around the area and saw how shabby it all looked with houses painted in gloomy colours. The only people we saw were Hasidic men in traditional black coats wearing the black hats over their yarmulkes. All the women wore wigs for religious reasons. The area had gone down hill.

I am delighted that I found the notebook from 1992. Thank you Sandra for leaving these stories.    ​