In 2021 during the Covid  Pandemic, completely unexpectedly I was contacted by two different people from my (late) sister Sandra's and my past, who knew us, and had found us via social media and the website.
I had an email from Louise the daughter of Margaret Hendry Bushnell in Scotland saying that her mum is our cousin. I hadn’t  seen or heard from any of the Hendry”s since Sandra and I were about 10 years old and Margaret about 8. Our mother took us up to Scotland to visit them.  Margaret’s father was our mothers’s brother James.  I had no idea that she was alive. Margaret for many years had been looking for the Horowitch girls, Myrna and Sandra. Since getting in touch we have found out that we share some Horowitch and Hendry stories and photos. I had a photo of Margaret”s family in an album and she had a photo of Sandra and me with our mum wearing a large hat. Margaret's family now know that the stories she had told them about Myer Horowitch and the sofa were true. Since then we have filled in gaps in our remembered stories from that time.


​Then 2 months after Margaret got in touch with me I had an email from a Richard Casson, from Cheetham Hill Manchester who knew Sandra and me very well from primary school. He had lived in the same area as us.  While researching Thomas Street School Cheetham Hill Methodist, Richard discovered this site. He is a passionate researcher of family stories and histories and has a record of people from that time who knew us both well. He is still in touch with many from that time.
Through these new encounters I am able to reach back onto the past and add information, my truths to those times which in turn will affect the future for all of us who knew those stories from so long ago.
History is fluid, the way we look at events is dependent on what information is gathered from different points of view, the context of the times.  Memories of past events and stories  will inevitably become fixed if no new input has  been added to those recollections.

Sandra would be delighted to know that finally  we can be heard.

Behind The closed gate

Sandra and I were part of a cover up about what really went on behind the closed doors of our house. I can now pull off the cover of respectability and reveal the secrets. The moral and cultural framework at the time of our growing up silenced us all.
"Susan as a child herself would have had no idea what madness went on inside the house behind the gate.  Who would have listened at that time to 2 young children talking about their mother?
Sandra and I would come home from school find our mum on the floor completely drunk, ranting incoherently or find her trying to kill herself by leaving the gas poker on unlit. Our mother hated all our friends and would let rip how awful they all were. Even our dad concealed the secret. ” Myrna.

Susan - "We lived in a narrow environment, were not really aware of things  outside our own world.  Todays age of electronic communications  would have been unimaginable then.
We grew up in an era where RESPECTABILITY and MORALITY ruled the day.  Ladies wore hats and gloves, when they went out. When did you  last buy a pair of dress gloves to match your shoes?   White shoes could be worn from June, before then it was déclassé.
Times have certainly changed".
"It’s fascinating how things change, words take on other meanings, what was important at one time becomes irrelevant at another time. All this is what interests me about looking back at these stories," Myrna.

Susan  "A major scandal that did become public.  A Rabbi in the community was having an affaire with the wife of a Jewish butcher.  The husband found out and threatened him with a meat cleaver. His aim being to remove the offending equipment.  He was prevented from fulfilling his ambition."

“I am able to amend the past by telling 'what happened next' therefore the stories in the Past become the Present and the Future will change because of the new information," Myrna.

Myrna “Yes Sandra was very good at art. As I was a year ahead no one knew about me. Sandra and I both spent time drawing around our home. At Broughton High School for girls encouraged by art teacher Miss Grist, I also became ‘good at art’. Both Sandra and I were encouraged to study art at Manchester Regional College of Art. I completed the course but Sandra decided not to, as she was so upset by our dad' premature death that she felt she didn’t deserve to continue. She was almost 17 year old. From that time I have lived my life through art in, fashion, prints, greetings cards and film.
Sandra after a divorce returned to complete the art course. Her talent was such that she got accepted on the course simply with an A4 folder of her recent drawings and paintings. Sandra and I over the years shared many creative projects".

Past, Present & Future. I incorporated these images into an installation about Time on a Digital Film and Animation MA course in 2009 - 2010 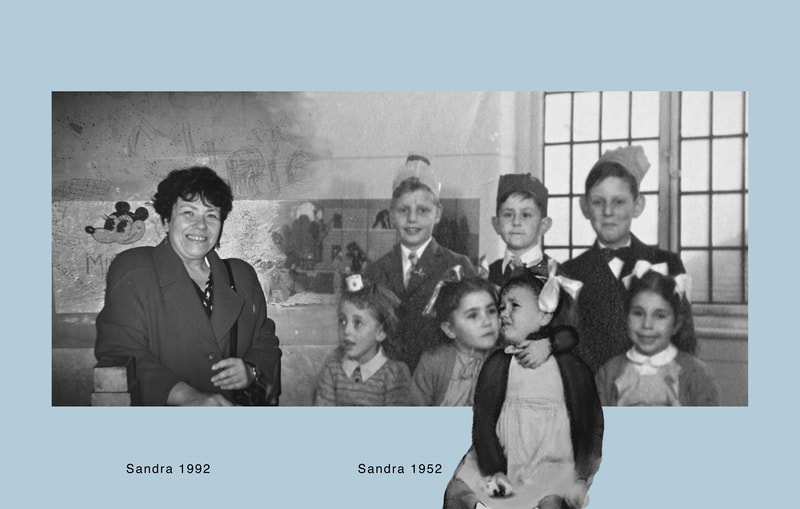 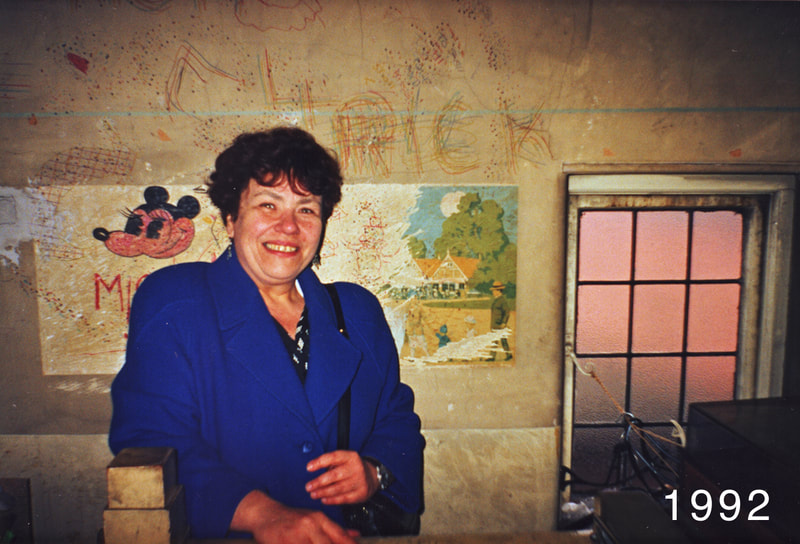 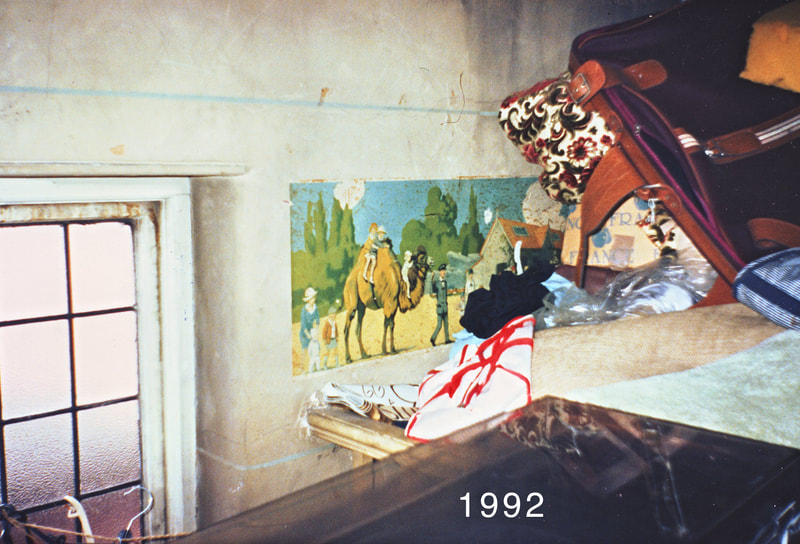 In 1992 Sandra and I on a trip to Manchester walked up to our old house at Stanley Road and knocked on the door. The last time we had been in our house was 1961, the year our father died. The lady who owned it now, remembered our name. She was a short blonde stocky woman with a baggy jumper and wore a neck brace. She was from Liverpool, a market, Jewish trader selling Marks and Spencers' seconds. She had bought the house 16 years ago from the Herwells who 14 years earlier had bought it from the Horowitchs, our mum
​
Amazingly, she knew names of people we had played with as children, Irene Freedman, Mark Seitler, Philip Aronson from Marston Road, Nora Landsman, Susan Mendelssohn, the Gibbs the market family and Morris Radovan.  Rita Pollock had told Greta Sneider that she used to play in the top room with the Horowitch girls. They were all her friends.
When we went up to our old  playroom which was now their stockroom as they couldn’t use it for business reasons there on the walls were the original prints of pre-war Zoo pictures which were from our childhood in the 1950s.  Sandra and I remembered them as always being there. It gave us a jolt to see them again 30 years later.

The market lady then made a statement that rendered us speechless. “This has always been a happy house a Mazaltov house,” she said. Sandra and I when we left couldn’t stop laughing.
The house for us had darker memories. Our mother's many attempted suicides, her alcoholism, and her hysteria.

Feedback from the past to now

RICHARD CASSON’S Thomas Street stories and more
"The Jewish community is so tight. I still retained a core of friends from primary school days (not secondary although one or two of these have crossed my path) and information just seemed to come my way. I suppose most of us as we grow older wonder what might have become of our primary school classmates? Some of the people in the Thomas Street black and white school photographs I just felt very close to as I had played with them as kids and wondered what became of them. Every one has a story to tell.
Dear Sandra is in several of my class photos however it was her talent for art that I remembered mostly. I do remember the playroom in your house. I certainly had no inking of some of the things that have recently been revealed.
When the Thomas Street ex pupils started to meet up regularly it was always a case of ''I wondered what happened to?"
Brian - "I remember well the Horowitch girls, particularly Sandra, and even the mother. She was, of course, close with my grandmother Anita, and I remember being invited to parties at their place. I have a picture of Sandra at one of my parties. And I was quite fascinated with the webpage and the openness with which they wrote about the relations with the mother".
Susan - "Myrna and the late Sandra have my admiration and respect on being strong, proud women they became.  The beautifully recorded family history is a tribute to them and their achievements". 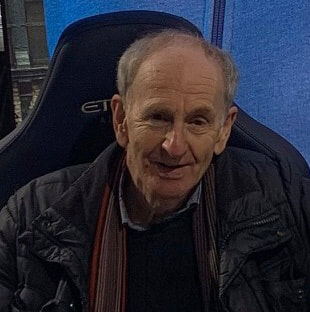 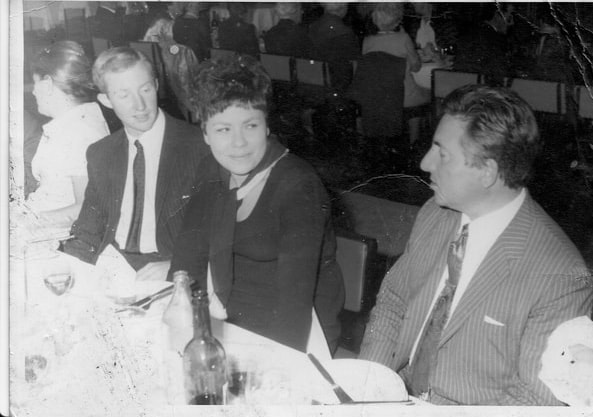 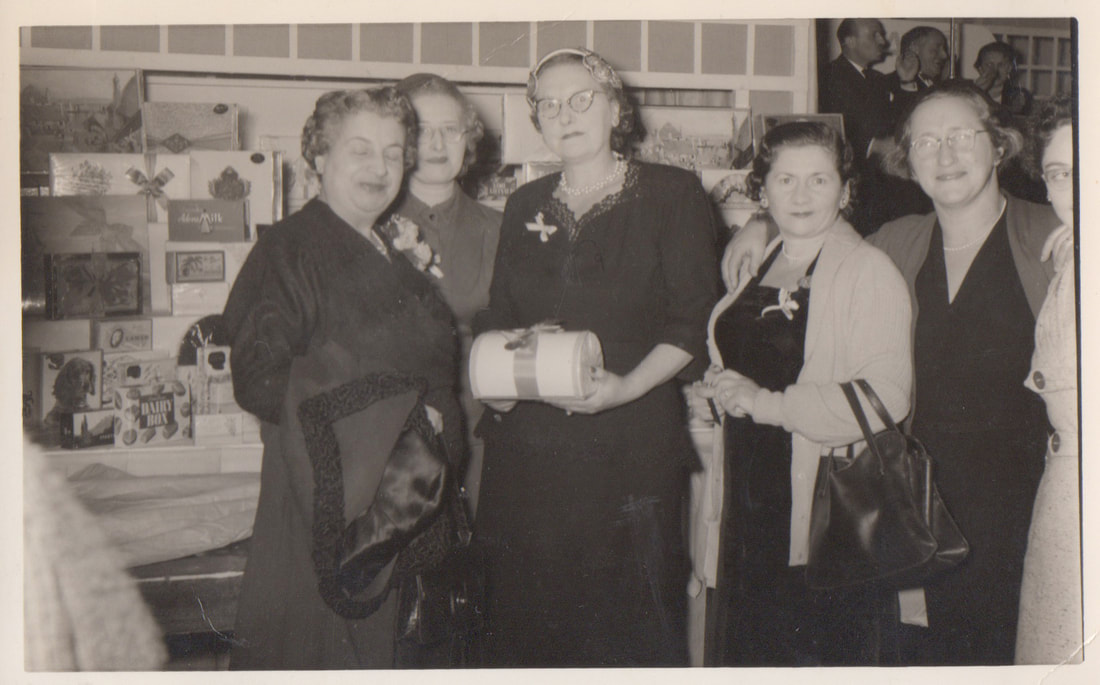 Here is a video installation I made exploring NOW, Past Present & Future